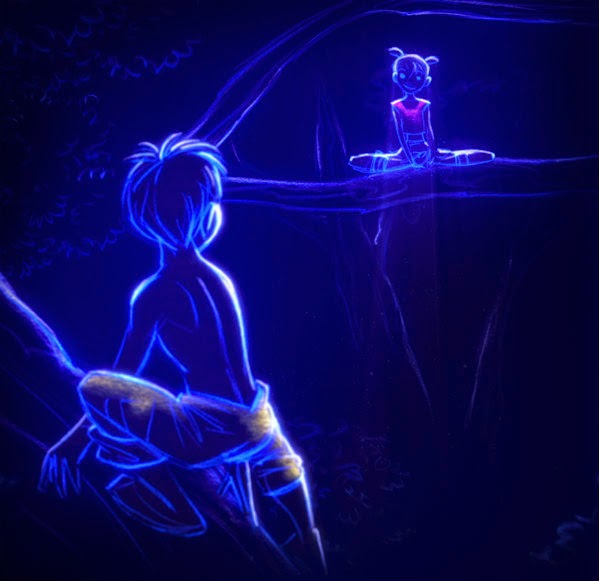 Starting today, "Duet" is available globally as Google's Advanced Technology and Projects group third Spotlight Story on the new Moto X, Moto X (1st Gen.), and Moto G 4G LTE. "Duet" is an interactive love story that brings the timeless art of hand-drawn animation to a new mobile format. Animator Glen Keane spent 38 years animating some of Disney's most beloved characters for movies like "The Little Mermaid," "Aladdin, "Beauty and the Beast" and "Tangled." Today, Glen Keane shares what it was like to work on "Duet" in his own words. We hope you enjoy.

****
Duet is an interactive animated story. It is a synthesis of the most ground breaking virtual world technology and the most ancient of all art forms—drawing. From the beginning of this project we knew it would be a celebration of life through line. The entire production was a creative adventure. We are a small team of artists and programmers working together to accomplish the charge of ATAP’s Regina Dugan set before us. “I want you to make something beautiful and emotional,” she said. “You push yourself creatively and that will push us technologically.”

Duet is a love story between two characters, Mia and Tosh, whose paths cross throughout their lives. Different than the traditional linear story, Duet employs a multi-layered approach that could best be described as a double helix in which the characters’ story arcs literally spiral around one another. Figuring all of this out was enough to make our collective heads spin! Fortunately we were blessed with an incredible ATAP team of technical engineers led by Rachid El Guerrab. The artistic half of our creative suite was led by our producer Gennie Rim and Production Designer Max Keane. Together, my assistant Sarah Airriess and I drew over 10,000 drawings to create the animation for Duet.

Again and again, we were surprised by the freedom this interactive storytelling provided. Jan Pinkava, who pioneered and directed the first Spotlight Story, “Windy Day”, continually encouraged us to put the camera into the hands of the audience. However this is not an easy or natural thing for a filmmaker to do. The tendency is to want to control the visual composition, but with Duet we learned to coax rather than control. Because of the nature of this virtual world technology there were no individual shots cut together. It is all one continuous living moment. I think of it less as a traditional film and more as a visual poem.

Our music composer, Scot Stafford, may have had the greatest challenge of all. Not only was he tasked with creating an emotional score, but it also needed to respond at any moment to the viewers' choice and seamlessly switch themes from one character to the other. Duet is in every way a partnership between the visual and the musical.

Throughout my 40 year career as an animator I have benefitted each time new technology crossed my path because it invariably forced me to become a better artist. In a similar way, Duet has stretched all of us creatively who worked on it.

We have learned that when it comes to storytelling, everything is possible. There still remains so much more to discover.

We are thrilled to share Duet with you today.

Editor's note: We made a mistake in earlier version of our blogpost when it said "Duet" would be supported on Moto G (2nd gen.). Unfortunately, that was incorrect. It is currently only supported on Moto X (1st and 2nd gen.) and Moto G 4G LTE. We're very sorry for getting that wrong.