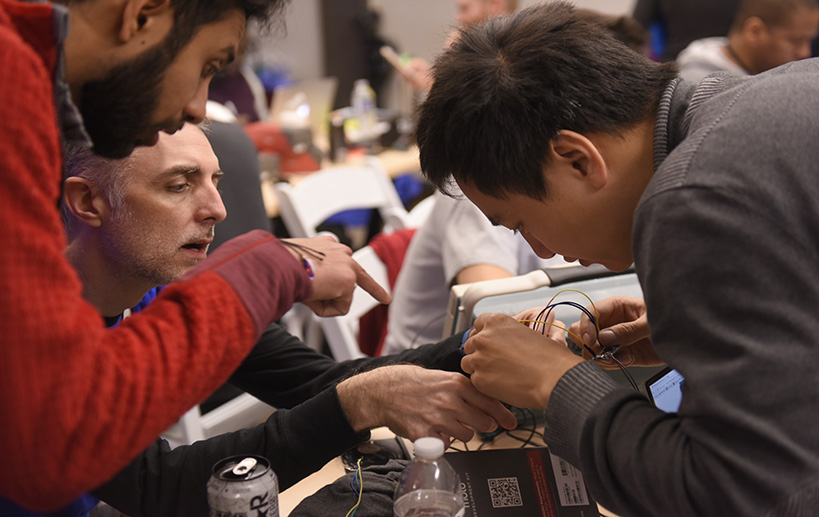 When we launched the Moto Z family of smartphones and Moto Mods, we opened up a new world of possibilities. We shared our commitment to innovation and engaging the developer community by giving them the tools, resources and inspiration to fuel the Moto Mods ecosystem while reducing the barriers to bringing great ideas to life. Since then, we’ve been hosting developer events around the world to support developers as they use our Mod Development Kit to come up with new Moto Mod concepts.

As we travel the globe, we’re finding no shortage of creative ideas and prototypes for new Moto Mods. At an event we held in India, more than100 developers, engineers, students and partners came together to brainstorm new Moto Mod concepts and discuss how to bring them to life. During two recent developer hackathons -- the Campus Party hackathon in Buenos Aires, Argentina, and the Mod the Future hackathon in San Francisco, CA (where three teams that had previously participated in our New York hackathon also attended) -- participants built prototypes of their concepts. Here are some of the top ideas:

“Baby Care” – Gabriel Lucas Quispe Delgadillo (Buenos Aires)
Imagine a more restful environment for babies. This new Moto Mod concept provides automatic alerts when conditions aren't ideal for a child. For example, users will see real-time indicators about whether the temperature in the room is too hot, too cold or just right.

“Moto Color” – Emanuel Lorenzo and Santiago Zoberman (Buenos Aires)
A color sensor for the visually impaired, Moto Color will emit a sound indicating whether the color being analyzed is red, blue or green. An alternative option would be for Moto Color to emit a vibration, which would vary in intensity depending on the color.

“Solar-Powered Battery Charger” – Ivan Milutimovac (San Francisco)
This Moto Mod concept allows you to charge your Moto Z in sunlight. As opposed to current battery-charging devices on the market that require cables, this one is wireless and is expected to charge the phone to 100 percent in about 10 hours.

“Simple Syrup” – Tal Golbus (San Francisco)
Monitoring blood glucose on-the-go can be a challenge. This concept tracks your blood sugar reading and was created for diabetics who need to carry large diabetes cases with them.

“ModCoholic” – Adnan Ahmed, Afif Syed, Adil Bukhari and Marzuq Khan (San Francisco)
Created by a group of four high school-aged attendees and winner of the Honorable Mention, the ModCoholic concept is a breathalyzer that detects your alcohol level when you breathe into it. If it detects that you are over the legal limit, ModCoholic automatically asks if you need a taxi.

The next developer hackathon will take place in Shenzhen, China in mid-March. And in the coming months, representatives from the winning hackathon teams will be invited to our headquarters in Chicago to present their ideas to industry leaders and discuss how to bring their Moto Mod concepts to market. If the concept impresses Lenovo Capital, they may receive investment funding. Additionally, winning teams will be entered into the Moto Mods Partner program and will be connected with a dedicated Business Development Mentor.

But Moto Mod ideas don’t just come from hackathons. Visit our Indiegogo “Transform the Smartphone Challenge” campaign to check out some of the other concepts we’ve received and help crowd-fund those you’d like to see come to market.